Next Time We Love, a 1936 “struggling marriage” melodrama with a young James Stewart as a reporter and Margaret Sullavan as his aspiring actress wife, was adapted for radio repeatedly, including versions with Stewart and the very different Jimmy Cagney as newsman Chris Tyler. I hate to give away the ending, but a box of tissues may come in handy long before the final minutes. And the radio adaptations might be “spoilers” for folks who want to see the film with all possible suspense. 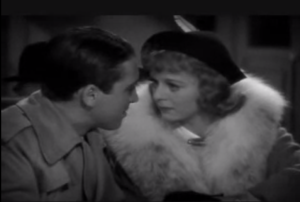 Stewart & Sullavan: Next Time We Love

Troubled marriages are a common theme in “newspaper movies,” from “The Front Page” to serious films like “Penny Serenade” and “Gentleman’s Agreement.”
What was it that inspired so many radio adaptations of this “Next Time…” film? Maybe audio-only storytelling seemed perfect for a sentimental drama where dialogue played a bigger part than costume, setting or action.
The story also has a modern twist — especially for 1936 — in that the complications aren’t just between a newsman’s schedule and leading a “normal” domestic life. There’s a “two career problem,” with a wife who builds her own success, from college dropout in the opening scene to celebrity actress.
She respects his professional decisions, even when he becomes a foreign correspondent. At one point he offers — or threatens — to take a publicity job with a circus, but she argues against it. It wouldn’t he journalism.
If he had heard of an opening as a theatre critic (or playwright), the film might make an even better double-feature with “All About Eve”! (That classic film was also adapted for radio several times.)
Above all, this is a love story — they love each other and they love their careers.
For the literary-minded there’s a bit of foreshadowing when Chris mentions that his apartment was once used by O.Henry — and there’s a hint of that author’s “The Gift of the Magi” in the way the husband and wife hide sacrifices from each other.

“I wonder what they do to newspapermen to make them work so hard… maybe they hypnotize them.” — best man, as groom leaves bride to cover a big story on his wedding night.

Ursula Parrott wrote the original story, serialized as “Say Goodbye Again,” then published as “Next Time We Live.”   The title became “… Love” in the Melville Baker film adaptation, although the original “… Live” title was used in foreign release of the film and in at least one of the radio versions.

Most of the broadcasts compressed the story into a half-hour, which couldn’t help but sacrifice plot details and character development, and rely on either awkward narration or the audience’s preconceived notions about newspaper reporters and dramatic actresses. Still, the top-flight actors who played the roles for radio brought their own nuances. Jimmy Cagney, for example, is a more driven, angrier and more frustrated version of the reporter than Stewart.

“The same old story: Reporter marries actress; she makes more than he does. It goes to her head; career becomes more important than her husband, and she runs out on him.” — the husband, but he apologizes for putting it that way, adding “I’ll love you when you’re 99 and I’m 101.”

The film title was used for a now-unavailable hour-long 1938 broadcast as an episode of Lux Theatre starring Sullavan, but joined by Joel McCrea instead of Stewart. Collectors’ log entries say the program aired Nov. 07, 1938, but none identify a copy of the audio as being available today.

Stewart — without Sullavan — played his original role in a one-hour radio version for NBC’s Screen Director’s Playhouse in 1951, with Eleanor Parker, a fairly complete version of the story, met with resounding applause from the live audience at the end, as well as a brief appearance by the film’s original director, E. H. Griffith. 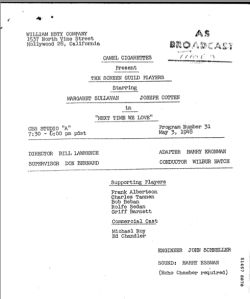 Radio’s Screen Guild Theatre broadcast the story at least three times. Two of those half-hour broadcasts are in “circulating” audio collections and one is online in script form. The first was in 1940, under the title “Next Time We Live,” starring James Cagney and Olivia de Havilland.
Under either title, “Maybe the next time we live we’ll have time for each other” is still a line spoken at a dark moment in the story. The name is not mentioned in the broadcast, but there is an interesting conversation with the stars at the end of the 1940 broadcast in which Cagney is asked whether he’d like to be a foreign correspondent.

“Nothing doing on this foreign correspondent business. If I had to be a newspaperman, give me a soft spot covering big league ball games. I’d rather duck pop bottles than bombs any day.” —Jimmy Cagney

(Ironically, within a few years Cagney was playing a foreign correspondent in Tokyo taking on the Japanese, putting his judo skills to use in 1945’s “Blood on the Sun.”)
Screen Guild’s 1945 Next Time We Love production with Robert Cummings and Joan Fontaine is available online, but usually as a roughly edited audio file with audible interruptions.

The “as broadcast” script of the 1948 production with Margaret Sullavan is available online. Sullavan recreated her original role opposite Joseph Cotten in the James Stewart part for that broadcast.

Also available in online archives is a half-hour production for Theater of Romance in 1946, which focus even more on the woman’s side of the story — with Joan Blondell getting the star billing, and an unidentified leading man, who sounds like Howard Duff, radio’s Sam Spade. (J. David Goldin’s RadioGoldIndex “Romance” entry lists Duff next in a cast that also included Lou Merrill and Gerald Mohr.)

mild-mannered reporter who sank into computers and the Web during graduate school in the 1980s and '90s, then taught journalism, media studies and Web production, retiring to write and play more music.
View all posts by Bob Stepno →
This entry was posted in 1930s, 1940s, 1950s, adaptations, foreign correspondents, marriages, reporters. Bookmark the permalink.