In real life, Goodman Ace did consider himself a “newspaper reporter” enough to worry about the image members of that profession had in the media. In an early profile by Howard Wilcox of “Radio Guide” (Feb. 1935, p.3), Ace talked about courting the woman who was to become his wife and radio partner:

“What a time I had convincing the folks that all newspaper reporters were not the blood-and-thunder characters described by the cheap fictioneers, and that all radio and theatrical people were not ill-mannered panderers and hussies!” — Goodman Ace, on courting Jane

Ace’s reporter, Neal (or Neil) Williams, was introduced as the boyfriend of the Aces’ border, Marge. At one point he turned the malaprop-prone Jane Ace into a correspondent for the paper — ghostwriting stories under her byline after she and Ace became involved with a movie star on the run.

Goodman Ace was author, producer and co-star in more than 1,500 episodes of “Easy Aces” — as well as author of several books, columnist for Saturday Review, and head writer for Danny Kaye, Milton Berle, Perry Como and others. The fictional “Mr. Ace” he played on radio was not a writer, although at one point in the storyline, he wound up working at the newspaper — in real estate advertising, with newsman Williams’ help.

The reporter’s involvement with his friends the Aces led to other plots: In one, he tried to promote fights for a boxer friend of Jane’s; another time, he covered-up a shooting at the Aces home involving a publicity stunt for his newspaper. It also involved discrediting a scoop in the opposition paper.

Shooting: Neal Has an Idea to Save the Day; Episode 67 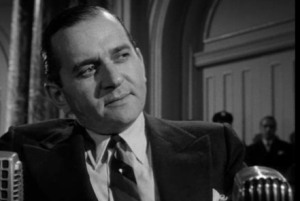 Played by actor Martin Gabel, the reporter ghostwriting Jane’s column got his “scoop” underway with some trickery. As the boyfriend of the Aces’ boarder, Marge, he knew a movie star had been hiding out at the Aces’ home for two weeks to get a rest from her public life. Although the actress had promised him an exclusive, he feared a competing reporter might get wind of the story if she stayed much longer, so he finally phoned the house anonymously, frightening her into fleeing back to Hollywood. He later confessed to using  what he called “my best spooky voice.”

“He scared me out of my half-wits,” Jane admitted.

Williams showed no remorse about tricking the movie star, who never knew the trick and honored her agreement to give him an exclusive on the story. She even called him to arrange her flight back to California before the Janes knew she had left. Williams explained later to the Aces and Marge:

“I was getting worried about my scoop. I wanted to get some action. Here I had one of the biggest stories of the day and I couldn’t do anything with it.”

When the smoke had cleared, Williams surprised Jane by putting her byline on a series of first-person stories about the Aces’ involvement with the actress — how Jane had “rescued” the star from a crowd of fans, then brought her home to help her get away from it all. On seeing the first newspaper column with her byline (Episode 103 at the Internet Archive), the typically clueless Jane’s reaction was, “I wonder when I wrote this…”

In retrospect, Williams’ ethics were on a par with newspaper reporters in movies like “The Front Page” and screwball comedies of the era. “Easy Aces” certainly fit that model. For example, while Williams was stretching Jane’s first-person tale into a two-week series, Jane misunderstood the “to be continued” at the end of the first story and began writing her own version. Any involvement of Jane with words led to puns, misunderstandings and malapropisms, which continued in the next episodes. (Episode 104)

Neal: “We have to keep it going… It’s great for the circulation.”
Jane: “I’m glad it makes you feel good.”

Not only didn’t Jane understand “circulation” beyond the blood system, Neal needed more than one episode to explain the concept of ghostwriting. Her visit to the newspaper was a great set-up for the wordplay the series was famous for:

Jane: “When I saw Joyce Blaine coming out of the picture show, you could have knocked me down with a fender, and then when she ran up to me and got into the car with me…

That sentence was as far as she got. Of course Neal wasn’t impressed, and repeated his previous day’s explanation of ghosting the story, setting up another “Janeism”:

Neal: “About this story running with your byline, with your name, ‘by Jane Ace.’ You don’t write that, I do. I write the stories, then I sign your name to them.
Jane: “Why Neal, that’s perjury isn’t it.
Neal: “Perjury? Heh. Call it anything you like, but it means a lot of money to us, Jane. For both of us.”

Actual journalists in the listening audience must have enjoyed writer Goodman Ace’s way with words. As for Williams, he showed a lot of enterprise for a small-town newsman. Thanks to the movie star stories in his paper, he had offers for follow-up stories: A movie magazine wanted Jane’s diary, a women’s magazine wanted an article, and another Hollywood journal called while Jane was in his office.

When Jane learned Neal was receiving and opening mail sent to the newspaper with her name on it, she had a word for it: “That’s blackmail, isn’t it?” Again, he explained:

“It’s a big chance for me to pound out a lot of yarns and peddle them around with your byline.
“You don’t have to write a word. I do all the work, and you get the credit if you want it, and we split the cash…
“It’s hot news… and since you’re the central figure, they want your version.”

Eventually, Neal read his next installment to Jane and showed her proofs of four more, which finally convinced her to let him continue with the ghostwriting. But she persists in presenting herself as the “author” to her husband and friend Marge — who provide their own critique of both Neal’s writing and Jane’s subterfuge (in Episode 105 in the Internet Archive numbering of the series).

Ace: Well I guess this kind of stuff makes good reading for movie fans. It must or they wouldn’t devote this much space to it every day. But as far as I’m concerned it’s a new high in lows.
Marge: Yes, it is a little maudlin… Give Neal a subject like this and he’ll spread more adjectives to the square yard than any man I know.

While often skating on the thin-ice of purple prose or conflict-of-interest, Williams did some serious reporting when Ace lost his savings in an insider real estate deal. In typical “Easy Aces” fashion, the deal had fallen through partly because the usually dizzy Jane Ace did a better-than-expected job of handling publicity for opponents of a public housing development, not knowing her husband was the silent partner. Journalism students may find some lessons there concerning the effectiveness of publicity campaigns.

After the real-estate failure destroyed Ace’s business, reporter Williams found Ace a job as in real-estate advertising at the paper. (Episode 128)

Ace’s business failure led to a story arc (Episodes 134 through 150) that eventually put Williams to work on a more serious investigative  assignment — and actually made him the lead character in the series.

The Aces, having lost their money in that crooked real estate deal, were tricked by Aces “friend,” the crooked alderman and developer,  into leaving for a job in the Southwest — so that Ace could not be called to testify in an investigation. 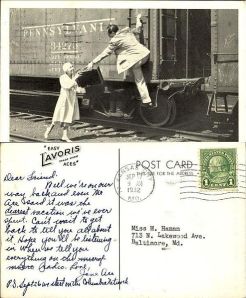 While the Aces were out of town, communicating by letter and postcard, a journalist became the hero of their series.
(A promotional card from an earlier vacation.)

Rather than follow the Aces to their new location, the radio serial stayed in their old hometown, had friends and family read cards and letters from them as part of the plot, and had Neal gradually uncover the real estate scandal. By the end, he had recovered the Aces’ money — and the real-life Jane and Goodman Ace two or three weeks away from the broadcast.

(If the sometimes-conflicting transcription recording numbers in the Old Time Radio Researchers Library and the Internet Archive’s collection of Easy Aces mp3 files are the same as the script list in the Library of Congress collection of Goodman Ace papers, the first broadcast of the journalist-related episodes were between December 1935 and February 1936. In real life, Ace saw to it that recordings of the series were retained for later sale into “rerun” syndication, which accounts for the availability of so many episodes — although collectors have sometimes jumbled episode numbers and titles.)

In the Neal Williams episodes, the reporter correctly suspects crooked alderman Tom Marsh of planning a double swindle, using clueless silent partner Goodman Ace’s investment to purchase land, then sell it to the city at an inflated price as the site for a public housing project. The accusation gets the reporter fired by his editor, who believes the alderman is honest, but an accidental dictaphone recording leads to a happy ending. The high-technology of their day, recording machines often played a part in movie and radio plots in the 1930s and 1940s, long before the Nixon White House tapes played a similar role in the Watergate case.

Coincidentally, Martin Gabel, the actor who played this investigative reporter on “Easy Aces,” later had a role in one of the best newspaper movies, Humphrey Bogart’s “Deadline U.S.A.,” but on the other end of investigative reporting — as the politician-corrupting gangster who is the movie’s main villain.

In this sequence of “Easy Aces,” however, Gabel’s character is on the side of journalistic truth and justice — if not complete objectivity. Getting back his friend Aces’ money is an important part of reporter Neal Williams’ plan, working with the Aces’ niece Betty, her boyfriend Cokie, and Williams’ girlfriend Marge.

Although he has been fired, Williams sticks with the investigation — even hires a detective and a safecracker to help uncover evidence. The full sequence took weeks, and is at both the Internet Archive and the Old Time Radio Researchers’ Library as episodes 134 through 150. Here are some highlights:

According to an OTRRpedia Easy Aces cast list, Neal (or Neil) was played by actor Martin Gabel, who also appeared on radio as a member of Orson Welles’ Mercury Theater and was among the cast of “The March of Time,” Time magazine’s radio “newsreel” that dramatized reenactments of news stories.

In well-known newspaper movies, Gabel didn’t return as a reporter, but in addition to playing the gangster villain of “Deadline U.S.A.” (1952) with Humphrey Bogart, he had the part of ill-fated psychiatrist Dr. Max Egelhoffer in the 1974 remake of “The Front Page” with Jack Lemmon and Walter Matthau.

Ace’s biography there notes that he launched his writing career as drama and film critic at the Kansas City Post in 1919. His radio career began in 1928, reading his newspaper columns on the radio, which opened the way for “Easy Aces.” He was eventually supervisor of comedy for CBS and established its school of comedy writers, as well as writing for several major television series.