This work in progress,assembled from previous blog posts, may have developed some coding problems over the years. Please report broken links or make suggestions in the Comment area below.

An early exercise in corporate image-building by program sponsorship, the DuPont-sponsored Cavalcade of America was broadcast weekly from 1935 to 1953. It presented always-positive, educational and uplifting stories from United States history and culture, primarily in the form of dramatized biographies and music programs. Never controversial, the tales ranged from simply proper to simply propaganda. The episodes were well produced and well acted, but rarely rose beyond the level of high school civics pamphlets.

Between its profiles of presidents, inventors, composers and explorers, listeners learned of printers, editors, writers and reporters, among them Ben Franklin, Thomas Paine, Joseph Pulitzer, Nellie Bly and at least two dozen other journalists of the 18th, 19th and 20th centuries. Twenty-first-century students should be impressed by the entrepreneurship, leadership, civic spirit, humor and other sterling qualities expressed — themes DuPont presumably wanted associated with its company, rather than phrases like “war profiteer” that hovered over its business after World War I.

Newspapermen were part of the series from its first year. (Newspaper women came later, but were featured frequently.) The Internet Archive has more than 700 recordings, including Cavalcade collections assembled into CD-length downloads by the Old Time Radio Researchers group, and a separate Internet Archive page with a streaming-audio player for 745 individual episodes. The online episode titles do not always indicate whose lives are dramatized in each episode, and sometimes themes are illuminated with short scenes from the lives of two or more individuals.

Under the heading “Winning Fame For American Literature,” Mark Twain landed his first newspaper job midway through episode 26, although most of the episode focused on his fiction and that of and Louisa May Alcott, along with a quick visit from a kindly Ralph Waldo Emerson. Ben Franklin appeared the next week in the 27th episode. Some broadcasts focused on “American” themes, such as “Opportunity,” which was illustrated by two publishing-related stories, one about Franklin and the next about Cyrus and Louise Curtis, who took some inspiration from Franklin when they created a magazine and newspaper publishing empire.

“Resourcefulness” followed in a few weeks, and featured publisher John Judson Ames bringing a printing press to California via Panama.

“American Journalism” became the topic of a two-part episode on July 1, 1936.

“From early colonial days, America had newspapers,” the announcer told the audience, “but in the middle of the 19th century she was to develop real journalists who served as definite inspiration in her progress.”

Written by Ann Barley, the two stories introduced Horace Greeley and his Tribune, with a message of education and moral leadership, and James Gordon Bennett II of the Herald, sending Henry Mortimer Stanley off in search of Dr. Livingston.

The radioplays paint memorable pictures of the journalists. A printer describing his new hire says of the young Greeley, “He’s gawky and thin and queer looking, a regular hayseed… but he’s startin’ to work as if he knows his way.”

Earlier historical figures, including Ben Franklin and Thomas Paine, are presented as printers and writers. Paine’s pamphlet, “The Crisis,” even gets a dramatic choral reading of its lines.

Greeley was the most-featured 19th century journalist in the series.

“This isn’t the other papers… I’m going to teach everybody in the cities, on the farms, on the frontiers to like important news. This country’s growing up… It doesn’t want any more colonial gazettes with local gossip, but big newspapers with news of the world.” — Horace Greeley

While “hyperlocal” online news is the industry buzzword of this decade, journalism’s role in delivering enlightenment and international news was featured in this 1936 tribute to the high ideals of American newspapers.

It was among the celebrations of American history and values presented in the first year of the DuPont Cavalcade of America series, itself a landmark in public-service broadcasting as corporate image-making, which ran until 1953 on radio and for another five years on television.

The announcer in the “American Journalism” episode notes that America had printers from colonial days, but three scenes point to the revolutions in journalism in the 19th century. The first is the 1831 arrival of the industrious and Bible-reading Horace Greeley on a New York printer’s doorstep at 5 a.m. We fast-forward a decade or two to present his goals as publisher of the Tribune.

Greeley’s campaigns to both fight political corruption and enlighten the general public are dramatized by a confrontation between the publisher and his business manager, who argues for the style of the more sensational crime-filled penny papers of the day as a way to reach the immigrant masses.

But Greeley says enlightening the masses is a more important goal than mass-circulation. The dispute is resolved when an Irish cleaning woman comes in — clearly part of the masses — and refuses to part with her copy of the Tribune until the whole family has read about the political corruption in their ward.

As noted elsewhere on this site, Cavalcade — and other radio series — often featured Greeley as a model for American journalists.

Along with Greeley’s Tribune, this “American Journalism” Cavalcade episode presents the rise of modern newspapers with The New York Herald, telling the story of reporter Henry M. Stanley’s African safari in search of Dr. David Livingstone, ending not only with Stanley’s famous line, “Dr. Livingstone, I presume?” but with Livingstone’s response to the reporter’s request for an interview: “First, tell me the news of the world.”

Cavalcade was not subtle about making its point:

“In America many modern newspapers have imitated the energy and enthusiasm of such journals as the Herald and the enlightened tone of such papers as the Tribune, so that American journalism holds the respect of the world.” — Cavalcade of America

The typewriter, and the woman who invented a career
The Reluctant Pioneer isn’t specifically about journalism, but it certainly is related — the story of the invention of the typewriter, told in traditional “who, what, when, where” order by the woman who first made it run.

This radio drama features the creation and marketing of the first model Remington — pushed by entrepreneur James Densmore, whom we hear cajoling inventors Christopher Latham Sholes and Carlos Glidden into changing the world of communication.

The fact that Sholes started out as a Wisconsin newspaperman is mentioned early in the radioplay, but his daughter takes center stage. Vivacious June Havoc narrates the story in the role of Lillian Sholes, who became the first star demonstrator of the typewriting machine. The perhaps not terribly suspense-filled climax of the radio story is her 1870s competition with the “hand-writing champion of America.”

“A woman operating a machine — that’s very unusual,” Mr. Remington comments. And the first typewriter advertisement, at least as read during the program, promotes the completed machine as a device that will open a new occupation for women.

You also get to hear some of Remington customer Mark Twain’s early comments on using the machine, and Densmore’s pitch to Remington for the speed-writing competition.

“This contest will either put the typewriter across — or bury it so deep the devil will start typing his diary.”

The Cavalcade of America broadcast was recorded in 1951. For a more modern and scholarly treatment of the sociological and cultural impact of the writing machine, see Woman’s Place Is At The Typewriter (1984) by Margery W. Davies. Skill at the keyboard was not all it took to put women in the newsroom as reporters and editors, not just typists, but it certainly played a part. For more about two women who found their way in the turn-of-the-century newspaper world, see the Newspaper Heroes on the Air entry about former newspaper-woman Edna Ferber’s novel “Cimarron,” and its movie and radio adaptations.

Interesting footnote: Documents unearthed by radio historian Martin Grams reveal that an actual Remington #1 was used for typewriter sounds during the Sholes broadcast.

Business and public relations researchers also might note that Cavalcade’s sponsor, DuPont, had more than a passing interest in the Remington name. While Remington had sold off its typewriter business in the 1880s, it continued its focus on weapons-manufacturing in 1933, when historic gunpowder-maker E.I. DuPont de Nemours & Co., Inc., purchased a 60% share of the company. 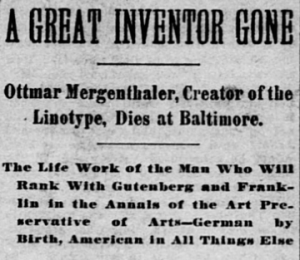 Also see Mergenthaler’s page at the Inventors’ Hall of Fame, and his page one obituary in the Washington Evening Times, Oct. 28, 1899.

The 1937 broadcast included a brief interview at the end with a man who worked with Mergenthaler 50 years earlier.

Mergenthaler’s role in revolutionizing the newsroom was also dramatized in a more romantic fashion by film maker and former newspaperman Samuel Fuller in his 1952 movie “Park Row.” In it Mergenthaler turns down a more attractive financial offer to work with Fuller’s hero at an upstart (and fictional) New York Globe, an amalgam of Pulitzer’s World, Greeley’s and Whitelaw Reid’s Tribune (where the Linotype was first demonstrated in New York), and Ochs’s New York Times, among others.

More recently a film history of the Linotype was in post-production in the summer of 2011, seeking development funds via the Internet.

Women in publishing were not only featured at the typewriter keyboard in Cavalcade’s dramatized newsrooms. Among its historic women, there were enough journalists, publishers and editors for me to create a separate summary page and individual notes like the one on Anna Zenger.

(Betty Hough is portrayed in “Once More the Thunderer,” with her husband, Henry Beetle Hough, co-editors of the Martha’s Vineyard Gazette.)

A collection of 15 years of Cavalcade programs is served on several pages at Archive.org, in part through the efforts of the Old Time Radio Research Group, which offers 14 CDs of Cavalcade episodes.

Benjamin Franklin and Thomas Paine were featured repeatedly, although Franklin’s early career as a printer is not always mentioned in episodes featuring his life as a founding father, scientist, inventor, general and diplomat.

Thomas Paine, with Robert L. Richards as writer or co-author of four scripts:

Newspaper and magazine publishers, editors, reporters, and fiction writers with roots in journalism were featured in more than 40 Cavalcade episodes (Apologies for the repetition here. These are rough notes from my iTunes music player directory, to be edited and expanded in time. The numbered episodes are all included in the OTRR Internet Archive collection.):

The archive Web pages include little information about individual episodes, some of which packed more than one biographical sketch under a themed program title. During the long run of the series, stories were sometimes re-broadcast with new players and similar or identical scripts. The broadcast years and episode numbers are indicated in the MP3 file names on the archive.org site.

The ZIP archive files from OTRRG include hundreds of pages of supplemental documents, including scripts, newspaper stories, logs and PDF editions of books of Cavalcade stories published for school use in the 1930s.

Martin Grams Jr.’s 1998 book, The History of the Cavalcade of America, includes a detailed episode guide and history of the program, produced with the cooperation of DuPont. Plot summaries are provided for 781 radio and 69 TV episodes, but the index includes only episode titles and actors’ names; there is no index by names of the individuals profiled in the series or keywords like “newspapers,” “journalism,” “editors,” “reporters,” “authors,” or “writers.”

Many American literary figures profiled by Cavalcade also had newspaper work in their careers, which was not always mentioned in the half-hour episodes. Among them are Washington Irving, P.T. Barnum, Edgar Allen Poe, O. Henry and Mark Twain.

For example, Noah Webster’s episode mentions that he founded The American Minerva, although it is described in the Cavalcade episode as a “magazine,” but it is also known as New York’s first daily newspaper. As “America’s Schoolmaster,” his newspaper editorship tends to get lost in his timeline between his Speller and his Dictionary.

Logs of Cavalcade episodes generally include broadcast dates and titles; some include the cast names and other information:

2 Responses to Cavalcade of America