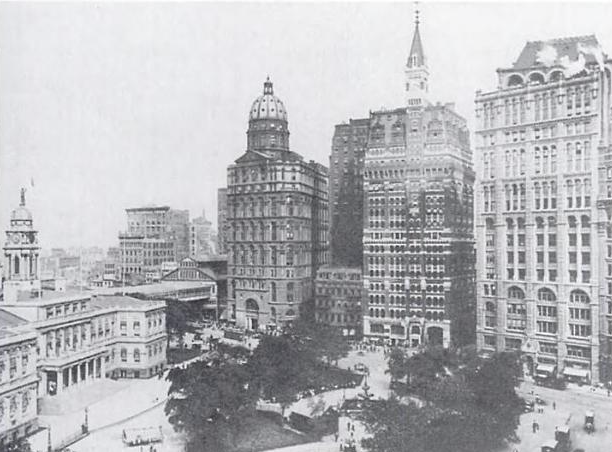 One of the classic newspaper films, Samuel Fuller’s “Park Row,” was never adapted for radio, possibly because it wasn’t a big hit (except among newspaper veterans with a soft spot for romanticized history). Or perhaps it was because the movie came out around the time that television started cutting into the scope of radio productions. In any case, one of the historical characters brought to life in the film did have his life dramatized on radio: Ottmar Mergenthaler, inventor of the Linotype, was featured in an episode of DuPont’s Cavalcade of America.

As you can see in the picture, the newspaper row was convenient to City Hall — and also to courts, theaters, the subway, a prison (“The Tombs” mentioned in the movie), and other sources of news. (See more notes and clips on my 1950s newspaper-films blog page.)

Fuller began as a newspaper delivery boy, became a copyboy, then a reporter, novelist, screenwriter, soldier, and film maker. But he — obviously, from the trailer and opening credits of the film — stayed in love with the newspaper business.

Some of his romantic newsroom history was perhaps too visual for radio: The fictional editor of “The Globe” literally invents the 20th century open-layout newsroom, ripping down partitions between desks in his print-shop building, fashioning a rim-and-slot copydesk, telling the chief copy editor he is “in the slot,” and using the left over wood to build newsstands for street sales of his paper. “The Globe” also pioneers a modern front-page layout with headline type so large it has to be carved out of wood, as well as the idea of multiple editions on a day — a composite of real-life accomplishments of Pulitzer’s “World” and other newspapers of the era.

Pulitzer is among other historical figures mentioned, but not portrayed, in the film. If you have not taken a media history course, or don’t remember them being mentioned in it, here’s one place where you might look them up: Mitchell Stephens’ Colliers encyclopedia article. Or try Wikipedia (but always take it with a grain of salt).

As mentioned above, Mergenthaler actually appears in the film; the others are mentioned — and honored by The Globe’s editor, who has their pictures on his wall.
Coincidentally, most of them also were heard Cavalcade of America episodes, and are discussed on the JHeroes section about that series.

The source of Fuller’s “Park Row” enthusiasm for 19th century newspaper lore is obvious in his autobiography. He went from being a street newsboy to running errands as personal copyboy for Arthur Brisbane, Hearst’s chief editor.

In the mid-1920s, when he was a few years older, he got his first reporting job on the legendary New York Evening Graphic tabloid.

His first novel, The Dark Page, published while Fuller was off fighting in World War II, was set at a Graphic-like sensational newspaper, and was made into the film “Scandal Sheet” just before Fuller started making his own movies.