Blood on the Sun, on the radio and on screen 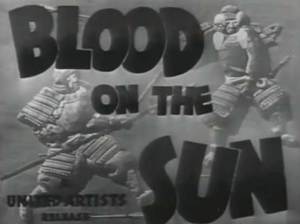 Portraying hand-to-hand combat was never one of radio’s strong points, but this mixture of journalism and judo is worth a bow, at least as a vehicle to discuss some of the quirks of radio’s approach to movie adaptations. As a bonus, we have the film itself.

The series Academy Award Theater offered several newspaper-journalist dramas that I’ll be writing about here, starting today with “Blood on the Sun,” which you can read more about at its Internet Movie Database link.

When Squibb sponsored its radio “anthology” series in 1946, it stretched the “Academy Award” title a bit, hinting at a collection of “Best Picture” winners, but providing something else. It did feature Oscar-nominated players and Oscar-connected films, but with plenty of mixing and matching. “Blood on the Sun” is a good example. (Click the title to download the John Garfield version as an MP3 if no player icon appears.)

The “Academy Award” connection for the radio broadcast was a double one, thanks to a casting switch that put John Garfield in the James Cagney leading role as a judo-expert foreign correspondent, uncovering secret anti-American plans in pre-war Japan. Garfield had been nominated for an Oscar, but in an unrelated — and very different — film, as a young composer in 1938’s “Four Daughters.”

“Blood on the Sun” itself actually won a 1946 Oscar, but it was for art direction-interior decoration, skills that don’t amount to much on radio. James Cagney and his original co-star Sylvia Sydney appeared in this Dec.3, 1945 Lux Theater Blood on the Sun radio version (click to download if there is no player).

Historical context: Remember that was at the end of the war — four months after Hiroshima and Japan’s surrender, and just a few days before the fourth anniversary of the attack on Pearl Harbor, as noted in the introduction by host/producer William Keighley, who reminisces about the days before the war — before he launches into a Lux soap promotion.

Students of history — military, movie or journalistic — could do more research, starting with Bosley Crowther’s archived 1945 review of the film in The New York Times, which notes that the role of a newspaper in the film is “quite contrary to the facts that history tells us.” (A controversial “Tanaka Plan” was actually  reported and became an anti-Japanese propaganda tool, but the American-owned newspaper’s role shown in the movie is fiction. In fact, the document is now widely considered to have been a forgery.)

Here’s Crowther’s June 29, 1945, closing paragraph, retrieved from the Times archive via ProQuest Historical Newspapers. Crowther was writing between the German surrender that spring and America’s atomic bomb attacks on Japan that August:

“So we have here an entertaining movie in the time-honored Cagney groove — tough, hard-hitting and explosive, with just enough rudimentary suspense. But let’s not approve it too quickly; it treads to boldly upon critical ground. In the first place, it makes a pulpwood fiction out of a historic incident. And, more than that, it puts the Japs in the popular but highly deceptive ‘monkey’ class. A true comprehension of our enemies and the sort of people with whom we’ll later have to cope is brusquely waylaid by a picture as glibly cocky as ‘Blood on the Sun.'” (Jun 29, 1945; The New York Times (1851 – 2007) pg. 12)

The full Cagney movie is also available in various digital video formats at both the archive.org film collection, IMDB/hulu.com and YouTube, apparently because its copyright wasn’t renewed.

One last bit of journalism-movie trivia: True, there was no big journalism theme in John Garfield’s “Four Daughters,” but Hollywood is a small town. One of the four daughters of that title was played by Lola Lane, perhaps even better known for lending most of her name to Superman’s feisty reporter girlfriend, after Lola played risk-taking reporters in other 1930s movies, especially “Torchy Blane in Panama” and “Death from a Distance” — enough to inspire a young comic book author.

mild-mannered reporter who sank into computers and the Web during graduate school in the 1980s and '90s, then taught journalism, media studies and Web production, retiring to write and play more music.
View all posts by Bob Stepno →
This entry was posted in 1940s, foreign correspondents, historical figures, movies, newspapers, reporting, World War II. Bookmark the permalink.