Postmodern radio with Wendy Warren and the News 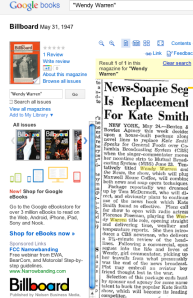 When I wrote the original version of this page, I’d only heard this one 1949 episode of “Wendy Warren and the News,” but it captured the series’ unique style.

Wendy Warren was a fictional noontime newscaster who shared the opening moments of the broadcast with the network’s real news staff. (That particular day’s news was a slice of history, Alger Hiss espionage case, House Un-American Activities Committee and all.)

Actress Florence Freeman, in character as Wendy, introduced Douglas Edwards for those real-world news headlines, then delivered her own real-world “News reports from the women’s world” column, then did a reverse twist on what actors call “breaking the fourth wall”:

She pretended to end the broadcast, step away from the microphone, and go on with her life — for all the radio audience to hear. From there on it was “soap opera,” even if the sponsor was Maxwell House, not Lux.

(Douglas Edwards, meanwhile, disappeared from the day’s broadcast after that first batch of headlines, presumably to grab lunch, then prepare for his no-fiction-allowed role as CBS evening news anchor.)

I first heard of this program just a year or more ago in a phone conversation with J. David Goldin, “the man who saved radio,” who describes eight episodes in his RadioGoldIndex, now hosted at the University of Missouri, Kansas City.

That one online example of the program didn’t jump out at me — it was buried in a huge “Singles and Doubles” collection the Old Time Radio Researchers Group had uploaded to Archive.org. Even as compressed MP3 files, the collection would fill several DVDs, as noted on this Singles and Doubles Collection summary page, but there are separate Web pages, broken up alphabetically.

Later,two episodes of Wendy Warren and the News turned up in the Old Time Radio Researchers group Library.

The presence of Douglas Edwards on this show was the real surprise, but then radio reporters did shift roles at times, including covering historical events in dramatizations for CBS’s own “You Are There” series. In one of Edwards’ “You Are There” appearances, he interviewed actor Edwin Booth, asking him, among other things, “Do you have any idea why your brother killed President Lincoln?”

Although Walter Cronkite replaced him as CBS’s evening anchor, Edwards was among the leaders in the field, winning a Peabody award and making his way into the Radio Hall of Fame.

Edwards headlines were part of the Wendy Warren program for 11 years, 1947-58. I learned that at his biography at his archive site at St. Bonaventure University. Coincidence department: Thanks to Google, I later discovered that the reference to the program was added to that bio a few years ago at the suggestion of the Metro Washington Old Time Radio Club, which I joined earlier this summer!

Thanks to another old time radio collector, nicknamed “Nightkey5,” the Internet archive acquired three episodes of the Wendy Warren series, which the collector date-checked according to the real-world news reports. (Two from April, 1948, plus that 1949 broadcast opening with the Alger Hiss trial.)

Here’s how Time magazine described the program back in 1947:

Sudsy daytime serials are easy targets for radio’s detractors. But soap operas go on & on because sponsors find them profitable. Last week, an outlandish new jumble of fact & fancy called Wendy Warren and the News (CBS, Mon.-Fri., 12 noon, E.D.T.) tried desperately to vary the formula.
The new twist: CBS Reporter Douglas Edwards leads off with a three-minute summary of the day’s headlines. A girl reporter named “Wendy Warren” (Actress Florence Freeman) follows him, shrills out 45 seconds of “women’s news,” promptly plunges into her tortured fictional love life. By the end of the first broadcast, the new heroine was in an old, all-too-familiar lather. “She turns deathly pale,” the announcer confided, “and, but for Gil Kendal’s ready arm, would fall.”

As you can see from Goldin’s eight-episode summary, Wendy’s listeners heard about more than her love life — spies and international intrigue were part of the plot. So was a newspaper reporter named Don, and (in the commercials) “a talking dog who actually barks, ‘America’s largest selling dog food!'”

Meanwhile, in the coincidence department: Of the many real people named “Wendy Warren,” at least one is in the news business. In fact, meet Wendy Warren, vice president and editor of Philly.com. I’ll drop her a line on Twitter to see if she’s ever heard the previous century’s Wendy Warren, and I’ll browse around Philly.com when I have a chance.

Update: Oh great… I send her a Tweet and five minutes later the Philadelphia mayor declares a state of emergency over Hurricane Irene! No time for casual mail with a real-world news person!

6 Responses to Postmodern radio with Wendy Warren and the News