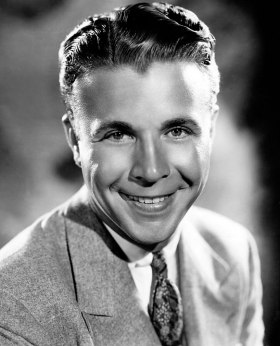 In 1948, ABC radio tried out an updated version of the Ben Hecht & Charles MacArthur newsroom classic The Front Page as a 13-week summer-replacement series. Newsroom-background sounds set the opening scene, not unlike the start of the gender-shifted Front Page remake, “His Girl Friday,” but the similarity ended quickly, at least in the one episode I’ve heard — and which you can play here. With familiar radio voices Dick Powell, starring as reporter Hildy Johnson, and William Conrad, as a rather diminished version of editor Walter Burns, this was neither the original “stop-the-hanging and keep Hildy from quitting” plot nor the anything-goes Roaring Twenties setting of the original play. But what should we expect from a Truman-era Front Page? 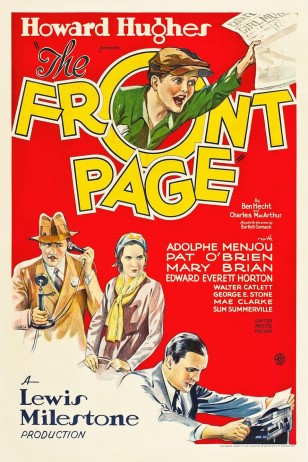 One June 3, 1948, episode of the series survives in online archives, including RadioEchoes and the Old Time Radio Researchers group online library. It’s “The Frightened Swede,” with Hildy learning that his Swedish roots could get him a story from an eccentric old man who is giving away $10 bills on a street corner. Powell even gets to speak a couple of lines in Swedish! The story is more reminiscent of some “Night Beat” human interest plots and — with a murder added — which reminds me of Powell’s movie and radio detective roles (Rogue’s Gallery, summers 1945 & ’46 and Richard Diamond, 1949-53). At least Powell’s Hildy doesn’t get knocked unconscious, which was a regular feature of his post-Marlowe detectives. (He played the lead in the film of Raymond Chandler’s “Murder My Sweet” in 1945, but other actors were Philip Marlowe on radio while former musical-comedy star Powell was cast as more light-hearted radio detectives, literally ending each Richard Diamond episode crooning to his girlfriend.)

Powell and Conrad’s Front Page portrayals had little in common with the rapid-talking Walter and Hildy we met as newsroom rascals in the Front Page play or its movie adaptations, at least if this one episode is typical. They even show some restraint in their reporting!

There’s even a hint that the editor might be seeing a psychoanalyst to recover from childhood trauma — definitely not something we’d expect from the news-obsessed Adolphe Menjou, Cary Grant or Walter Matthau versions of the character, although it might explain a lot. (Come to think of it, an “alienist” analyst does have a part in the original Front Page, managing to get himself shot by the condemned man he is interviewing, making possible the prison escape at the center of the drama. But he never returns to analyze Walter Burns, and the therapist in this radio play is a much different sort.)

Another difference: In the radio series, the newspaper is called the “Examiner,” not the original play’s “Morning Express.” It competes with a “Tribune,” represented by some tavern banter between Hildy and a Tribune reporter, as well as by Walter’s calling Hildy on the carpet when the Tribune gets a story first.

The radio series was written by Morton Fine and David Friedkin, and directed by Bill Rousseau, “based loosely” on the characters created by Hecht and MacArthur, according to John Dunning’s On the Air: The Encyclopedia of Old-Time Radio, which reports the summer series “drew scathing reviews for the liberties it took with the original play.”

Anyway, there’s not much here for journalism students to learn from, except that reporters can be compassionate, might even respect their competition, and that being bilingual might be an asset. For the wacky fun and ethical failings of working for a lunatic editor at a scrappy Chicago newspaper in the twenties, consult the original play and the earlier films, or the half-dozen radio adaptations I’ve written about here. Fans of media technology may be interested in the presence of a new high-tech-in-1948 tape recorder as a plot device. In the end Hildy does get to solve that murder, but he’s still more in the role of Dick Powell, detective, than Hildy Johnson, newsman.

mild-mannered reporter who sank into computers and the Web during graduate school in the 1980s and '90s, then taught journalism, media studies and Web production, retiring to write and play more music.
View all posts by Bob Stepno →
This entry was posted in 1920s, 1940s, adaptations, detectives, Drama, editors, Hildy Johnson, newspapers, radio. Bookmark the permalink.