Cagney, Dickens and ketchup save a newspaper 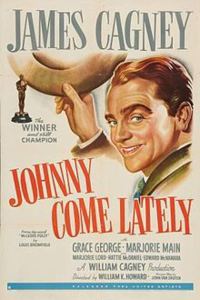 Local newspapers have been fighting for survival since the horse-and-buggy days when this story takes place.
The 1943 film Johnny Come Lately starred James Cagney as an  out-of-work “tramp reporter” who both rescues and is rescued by an elderly newspaper owner. He faces a vagrancy arrest when they meet, but she likes the fact that he is reading The Pickwick Papers and laughing out loud. She had met Dickens, you see.
When Screen Guild Theater brought the story to radio in 1948, Agnes Moorehead made a spirited editor & publisher of the Plattsville Shield and Banner, more than holding her own as Cagney’s co-star. (Vinnie McCloud or “Mrs. Mac” had been played in the movie by Grace George.)
The announcer doesn’t identify the other players, including the villainous competing publisher, a bigshot state political boss, and Gashouse Mary, an important news source in the film. A bottle of ketchup also plays a major role. And the “experience is the best teacher” life of a wandering newspaperman is even used as a metaphor by the show’s sponsor.
There’s just enough story here for the half-hour radio format. Bosley Crowther at The New York Times didn’t think Cagney was well-served by the movie script writer and director, although Variety liked the original film:

James Cagney’s first independent production via brother Bill Cagney’s unit, comes through with a topnotch performance in the story of the crack tramp newspaperman, afflicted with a wanderlust complex, who temporarily halts in his tracks to help an old lady continue publication of her newspaper and battle the crooked politico-financial forces in her town.

In the end, the tramp reporter is headed back to the road, but he gets in a good last line, when the editor says she won’t try to keep him around because she knows he likes his freedom, and knows he has more Dickens reading to catch up on.
Johnny:

“Yea, I like my freedom, but I also like your freedom and the freedom of all those decent honest citizens out there. That’s what all this fuss has been about. I won’t forget that, Mrs. Mac.”

Mrs. Mac wasn’t Ms. Moorehead’s first entry in the newspaper game on radio. She had already played star reporter Nellie Bly on Cavalcade of America and, coincidentally, would later be the reporter in a Dickens story, “The Signal Man” on an episode of “Suspense.” Pioneer oldtime radio collector J. David Goldin’s logs also list Moorehead as co-star in an optimistic CBS program about atomic power, but I haven’t been able to find an online recording. His summary says it’s “The Sunny Side Of The Atom. June 30, 1947… A dramatization of a woman reporter’s investigation into the peaceful atom. How doctors use a radioactive tracer, a radioactive medical lab, using isotopes to find oil, and a radioactive farm.” The only other cast member Goldin mentions is Al Hodge, better known to radio listeners as newspaper publisher Britt Reid, whose secret identity was The Green Hornet, and known to early television viewers as Captain Video.

The playable and downloadable MP3 versions of the story above are from the Internet Archive collection of 348 Screen Guild radio adaptations.