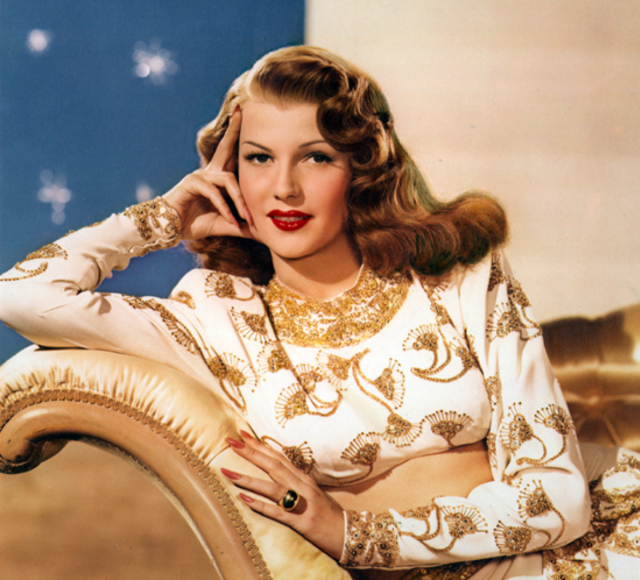 “The Lady Has Plans” has World War II’s favorite pinup Rita Hayworth (so described by host Cecil B. DeMille) in the role of a veteran newspaper reporter making a transition to radio news in Lisbon, and William Powell as her war correspondent boss — who assumes a new staffer named Sydney will be male.

Along with the brief 1943 battle-of-the-sexes mistaken-identity theme, there’s a spy plot involving secret plans that are supposedly tattooed on the new reporter’s back… And lots of laughs from the Lux Radio Theater studio audience when strange men keep wanting to unzip the back of her dress. Ah, the things independent women — actresses as well as reporters — had to put up with in the “good old days.”

As a reporter, Hayworth’s Sydney turns out to be brave and resourceful, even impersonating the tattooed spy who was supposed to be impersonating her. And she gets the drop on a Nazi spymaster before it’s all done, while her boss phones in a live broadcast from a Lisbon telephone booth. (I think that would have been stretching 1943 telecom technology a bit, but I haven’t researched the topic.)

Give a listen and see if you think the radio version is better than the movie, which New York Times critic Bosley Crowther called “straight, unmitigated flap-doodle” and a “thoroughly implausible tale.”

As a wartime broadcast, this also includes a war-bond sales pitch from Cary Grant, and mentions of Eleanor Roosevelt’s newspaper column and Rita Hayworth’s U.S.O. service.

As a 1942 Hollywood movie, “The Lady Has Plans” starred Paulette Goddard and Ray Milland, but Lux Radio Theater occasionally played the star-switch game. Here’s the Internet Movie DataBase page for the original.

The mp3 as-broadcast copy above is from the Internet Archive collection of 789 Lux episodes.

Finally, the picture of Rita Hayworth at the top of this page is from Wikipedia, which –appropriately enough– says it was used in a Lux soap magazine advertisement.

mild-mannered reporter who sank into computers and the Web during graduate school in the 1980s and '90s, then taught journalism, media studies and Web production, retiring to write and play more music.
View all posts by Bob Stepno →
This entry was posted in 1940s, foreign correspondents, international, radio, reporters, Uncategorized, women, World War II. Bookmark the permalink.