A gentleman of the press vs. ungentlemanly gentiles 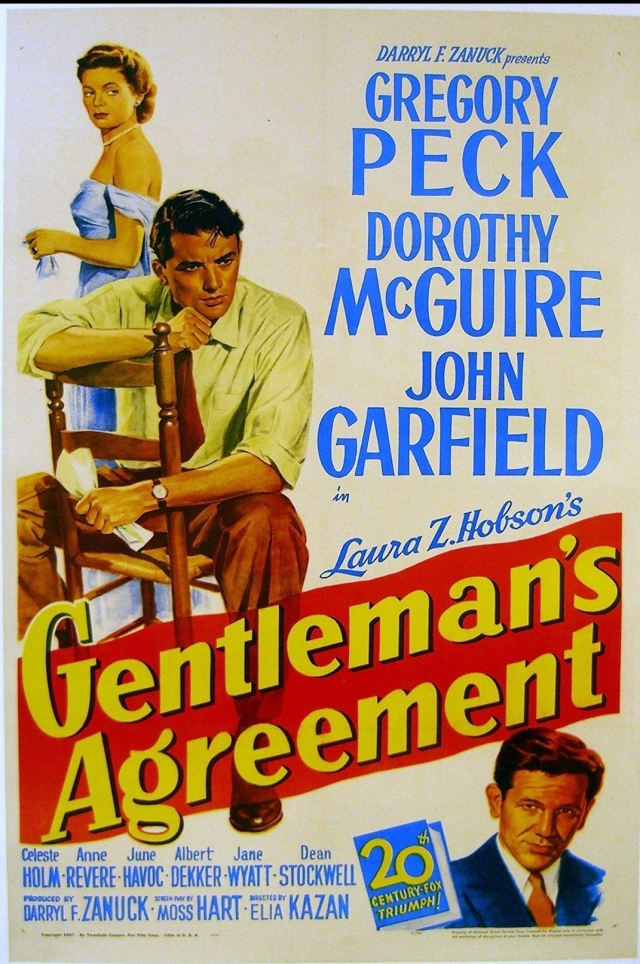 A Facebook conversation just led me to check back and see if I had ever posted a blog item about the radio adaptations of the movie Gentleman’s Agreement, and it looks like I hadn’t, other than a paragraph in my overview of movie adaptations by radio anthology series like Lux Radio Theater.

Lux is the only one that I had found that brought the Gregory Peck film to a radio audience, but it did so twice, in 1948 and 1955. The player above should get you the 1948 version, or you can click on either year to download an MP3 file.

The film about a non-Jewish reporter going undercover to get a story on anti-semitism was based on a 1947 novel by Laura Z. Hobson and won three Academy Awards, including Best Picture.

In an opening scene, the reporter, trying to explain anti-semitism to his ten-year-old son, says some people hate Jews, some hate Catholics, and some hate Protestants.

“But no one hates us, because we’re Americans,” says the boy. His father explains the difference, then, in a way worth echoing today, “Religion hasn’t anything to do with the country; you get it?”

Other than the basic idea of a reporter immersing himself in a group identity to get a story, there isn’t a lot of journalism technique presented in the brief radio versions of the story. It’s a more anthropological technique, but in this case with a strong element of deception thrown in.

For comparison, the reporter mentions having worked in a coal mine while writing a story about coal miners. (He also did a story about “Okies,” but doesn’t discuss the details.)

In any case, working in a new occupation, even as an undercover reporter, is not the same as pretending to be of a different racial, ethnic or religious group… as he discovers.

“Not that it would make any difference to me…” — with a hint of hypocrisy — becomes a key phrase in the story, whether spoken by a co-worker or the reporter’s new girlfriend. That relationship, of course, is the center of the drama, with the girlfriend’s family, friends and neighbors in suburban Connecticut all at risk of opening closets full of skeletons.

Given the problems of compressing a novel into a movie, and the movie into a half hour radio show, the Gentleman’s Agreement broadcast was still pretty powerful for its day… listen to that audience applause at the end!

Leading man Gregory Peck appeared in the first Lux adaptation, with Ann Baxter as the leading lady. Peck’s role as Phil Green was taken by Ray Milland in the second production seven years later, with Dorothy McGuire recreating her original role, and radio’s ubiquitous William Conrad as the editor.

Although the story is about anti-semitism, the level of racial sensitivity as late as 1955 is reflected in a between-acts discussion of a new film about South Africa that, an announcer mentions, features “tamed” Zulus in the cast.

Another story based on a best-seller about anti-Semitism didn’t quite make it to the silver screen, Earth and High Heaven, was a 1944 novel by Gwethalyn Graham, bought for the movies by Samuel Goldwyn, but dropped after Kazan’s Gentleman’s Agreement was released.

But it did get produced for radio, by Studio One in December 1947. Geraldine Fitzgerald plays the heroine, a Montreal newspaper writer courted by a young Jewish lawyer over her father’s objections. However, unlike “Gentleman’s Agreement,” the topic of prejudice isn’t a crusade for her social-department newspaper job — the movie’s drama is about its impact on her personal life. She does do some fact-checking with a news source when her father fabricates a lie about the business practices of a Jewish company in the city. But fortunately there was never a hint of the lie getting into print.

mild-mannered reporter who sank into computers and the Web during graduate school in the 1980s and '90s, then taught journalism, media studies and Web production, retiring to write and play more music.
View all posts by Bob Stepno →
This entry was posted in 1940s, 1950s, adaptations, civil rights, reporters, stereotypes, undercover. Bookmark the permalink.