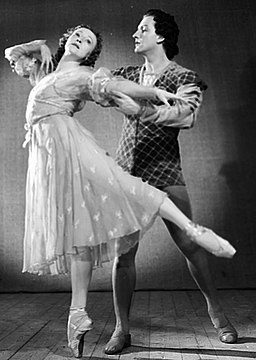 Radio’s dramatic adventure series like “Suspense” and “Escape” sometimes relied on journalist characters as narrators, doing what reporters do — telling a story mostly from the outside.

In “Two If By Sea,” the derring-do is their own. Even in peacetime, it suggests, the life of a foreign correspondent can be “high adventure” too.

In this 1950 Cold War story — which takes the series title “Escape” literally — a London newspaperman’s Russian ballerina bride is forbidden to leave Moscow. The reporter plots a rescue.

What role will an American radio newsman’s way with words play in reuniting them? And do many journalists become skilled yachtsman, or is that just a British thing?

John Dehner, in the role of the Englishman, played a London reporter from a different century, as star of his own Western series “Frontier Gentleman,” which has its own JHeroes page.

The excellent Escape-Suspense blog has additional writing and cast information on the “Two If By Sea” episode.

The Old Time Radio Researchers Group, meanwhile, provides 250 episodes of the 1947-54 series for download at the Internet Archive Escape page.