Fighting drugs with a radio-comicbook crossover

Radio and movie star Frank Lovejoy would have been 104 today. Better known as the leading man reporter on Night Beat,  Lovejoy also took a turn as The Blue Beetle, a radio and comic book superhero who appeared to borrow heavily from Superman and The Green Hornet. 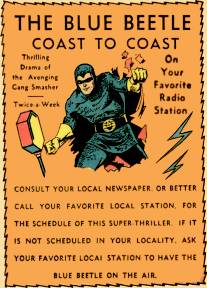 Unlike those two, the Beetle’s day job wasn’t at a newspaper. Instead, he was a rookie police patrolman. However, his girlfriend in the comic books was a Lois Lane style reporter, Joan Mason, who even appeared as the title character in some comic stories. And on the radio, he also shared the stage with newspaperman Charlie Stone, “ace reporter of the York City Sun,” friend of police officer Dan Garret (the Blue Beetle) and his partner.

The comic, launched in 1939, evolved into a radio serial in 1940 that ran for less than a year. Frank Lovejoy, the actor who played the Beetle, was to have more success a decade later playing a newspaper columnist in the mystery/drama series “Night Beat.”

Radio episodes of The Blue Beetle are available at archive.org, including Drug Ring (May 15, 1940), which includes reporter Charlie Stone. (Click the episode title to download or stream an MP3 if an audio player icon is not visible.) Not only does the character don his blue chain mail to fight reefer-dealers and opium dens, he begins taking a mysterious drug himself — a secret “vitamin 2X,” which gave him the ability to recover from bullet wounds and increased his strength and speed and mental abilities.

The reporter doesn’t have a big part in the episode, although he is observant enough to  get the license number of a gunman’s car. When Garret’s partner sends him to call for an ambulance for the hero, shot down on the street, he mentions that he’ll call his paper at the same time.  “Boy, what a story!” he says, on his way to the phone.

(Since my first posting of information about the Blue Beetle on my Adventure series overview page, I’ve discovered that Archive.org has both an Old Time Radio Researchers Blue Beetle collection and a second BlueBeetle collection, which may overlap or vary in sound quality.)

Alas, the shows are juvenile, punctuated by organ arpeggios and overwrought dialogue, which may explain why the series had such a short run on radio, although the comic book has had several incarnations under several publishing companies over the years. Here’s an early sample Blue Beetle comic at the Internet Archive, an April 1943 World War II era episode, complete with both Irish and Asian cultural stereotypes.