Calling Clark Kent — not Superman — to the rescue 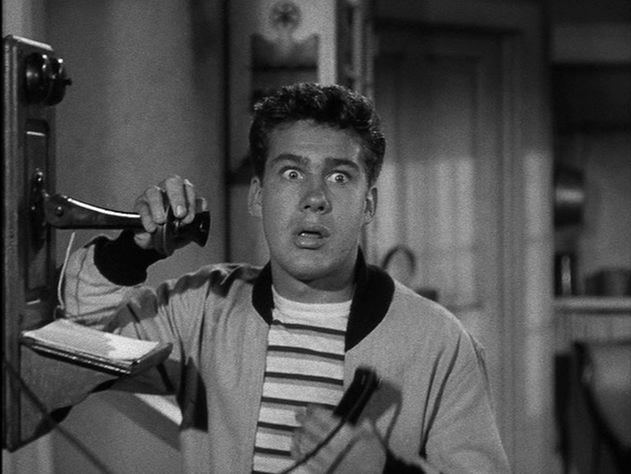 Jack Larson as Jimmy Olsen, calling an older and more experienced, if supposedly mild-mannered, reporter for help on a story about a mysterious lighthouse — and more. (A screen capture from one of the TV episodes based on the earlier radio Adventures of Superman, a broadcast you can hear below.)

News stories about September 2015 death of Jack Larson — “Jimmy Olsen” on the 1950s Superman television series — often mentioned the actor’s dislike for story-lines that repeatedly had “Jimmy” dripping wet, threatened by rising tides or torture-rooms filling with water. Superman may have rescued Jimmy, but Larson tended to catch cold from all those soggy re-takes, he told NPR’s Terry Gross in a charming 1993 interview, rebroadcast as a memorial.

That interview reminded me of a similar plot in a Superman radio episode, more than a decade before Superman and Jimmy took to the television airwaves; a little research revealed more than a coincidence.

This six-part Adventures of Superman radio story (combined into one big MP3 file at the Internet Archive), the Lighthouse Point Smugglers, was broadcast in the summer of 1940, then rewritten a decade later for TV. In fact, it became the first TV tale to put Jack Larson in that soaked-to-the-skin condition he disliked. It is a fine example of some difference between the early radio or TV incarnations of Superman and more recent Superman comics and feature movies.

Most obviously, the basis for the story is not a “superhero” in pursuit of a “super villain”; it’s a reporter after a story. This cliff-hanger radioplay, like many others in the radio series, is as much an “Adventures of the Daily Planet reporters” as a super-hero story. It opens with editor Perry White calling in Clark Kent to talk about his annual vacation; a phone call from Jimmy interrupts, and we’re off in pursuit of a story, and smugglers, and more.

The plot: Cub reporter Jimmy Olsen — played by an unidentified radio actor — comes up with a news story idea while on sick-leave. He contacts White to “pitch” the story idea and enlist the help of a more experienced reporter, Clark Kent.

Those who know Superman only through 21st-century films and comics may be surprised to find the plot has no threat to the city, nation or planet, and no airborne grand-standing by the guy with the red cape. It’s a mystery story — with an old house, secret passages and tunnels, a foggy sea, that lighthouse, and a hidden treasure.

This July 1940 story began only 70 days into the run of the “Adventures of Superman” series, which joined the Mutual network that February. In those early storylines, Superman tried to keep his very existence a secret. Having Clark Kent spend more time behaving like a reporter also suited the gradual pace of the brief daily serial episodes. Kent changed to Superman, signified by actor Bud Collyer dropping his voice an octave, only when necessary to fend off a gunman, break through a stone wall, or get somewhere in a big hurry. Presumably, after the battered criminals were picked up by police, their wild stories about a flying man in red and blue would sound like attempts at an insanity plea.

Kent to the Rescue 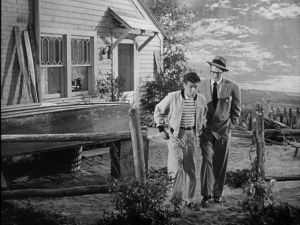 In this story Kent manages to smash down a door or two on his own without raising suspicion. And he gets full credit for rescuing Jimmy, and the boy’s cousin, and his aunt in three separate near-drowning incidents. The three are conveniently unconscious at the key moment and don’t see the literally superhuman effort involved in their rescue. They just figure Clark did it.

While Superman gradually revealed himself to the world in later episodes of the series, Kent became more “mild-mannered” as part of his disguise. Still, the newspaper focus of “The Adventures of Superman” continued through most of its daily-serial years, with some combination of Clark, Jimmy, Lois Lane and Perry White accomplishing some feats of journalism in almost every episode. That is, they tracked down facts, discussed story ideas, interviewed people, went to the scene of the story. The same was true when the radio series gave way to the George Reeves television series. The television variation on the “Lighthouse Point Smugglers” script is an example. Retitled “The Haunted Lighthouse,” it was just the second TV episode, broadcast in 1952, and then in reruns for decades.

In the radio version’s six 12-minute episodes, the lighthouse story has time to reveal more about a newspaper reporter’s life than a half-hour TV story. We learn about what sound like progressive personnel policies of Daily Planet editor Perry White: In his opening banter with Kent about Olsen’s letters and calls, we learn Kent has three weeks’ vacation coming, pretty good for 1940! And although Olsen is just a cub reporter, he’s also the beneficiary of the enlightened Mr. White, who explains his absence from the newsroom to Kent:

“He got sick. You know he helped his mother in the store, he was going to night school, and we worked him pretty hard here at the paper… Oh he’s all right. He’ll be back at work in another month or so. We sent him off on sick leave… up at a place on the New England coast…”

Jimmy’s illness is never mentioned again, clearly just a plot device to move the story to an exotic locale. But it’s not hard to imagine young listeners thinking, “Three weeks of vacation? A month at the ocean to rest? I want a job like that!” 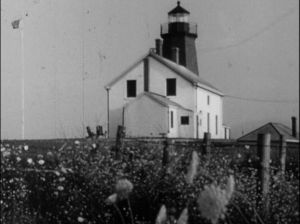 The plot thickens when Olsen notices a light in an abandoned lighthouse owned by his aunt, does some investigating, writes to White, and finally telephones long-distance (at his own expense, he points out) while Kent is in the editor’s office. The dialogue showshis dedication to the paper — and perhaps some shaky ethics about reporting a crime to the proper authorities, but is well within the spirit of popular culture’s portrayals of journalists at the time:

“There’s a story up here, a big story, and I’m the only one who knows about it. Mr. White, it’s smugglers. That’s only part of it.
“I don’t want to tell the cops,” he tells his editor. “I’m keeping it for the paper.”

He begs White to send Kent to help him dig out the story. Kent quickly agrees when Jimmy’s phone call is mysteriously cut off. Their journalistic investigation eventually does lead to smugglers, along with danger in Jimmy’s sailboat at sea, a hidden family treasure, a plot to steal it by the aunt’s mortgage-holder (a natural villain), and a narrow escape from a underground chamber filling with sea water. They all give the tale its five days worth of cliff-hanger endings.

Kent’s Superman persona only appears briefly when super-feats are needed — rescuing Jimmy after a boating accident, confronting an armed smuggler and then rescuing him after he jumps 50 feet into the sea, and later saving both Jimmy and his aunt from that underground room. In all cases, he keeps his Superman identity hidden. They other characters are left thinking reporter Kent is the one who did the rescuing, a bit of a contradiction for the “mild Clark Kent” description spoken by an announcer in the program’s stock introduction.

Jimmy is a reporter, not just a victim

But, while Jimmy Olsen and, in other episodes, Lois Lane, often moved the radio and TV story plots along by needing rescuing at least once a week, they also behaved like reporters. In this tale, Jimmy’s own curiosity and eye for detail — good reportorial skills — uncover the possible smuggling plot in the first place, and later reveal secrets custom-printed onto some ancient Chinese wallpaper at his aunt’s house. The young reporter literally stands on his head to decipher the message! There are several more general lessons here for aspiring journalists hearing the program:

Alas, the radio show never lets us hear whether Clark and Jimmy shared a Daily Planet byline, or how the story handled Jimmy’s relationship to the aunt and cousin — who apparently enjoy quite a windfall in the end.

“And Jimmy and I have a tremendous story for the paper, don’t forget that! Come on there, young fellow, get a move on… We’ll go find the nearest telegraph office.”

The announcer picks up from there:
“Everybody safe and sound… and another scoop for the Daily Planet is delivered by Clark Kent. But what’s coming next? Already, back in the Planet offices another adventure is waiting. Thrilling! Incredible! Tune in next time…”

The television story a decade later — the “Haunted Lighthouse” — kept some characters’ names and parts of the plot, but dropped others and added a pretty housemaid, a ghostly voice, some impersonations, a fight with a smuggler, and help from the Coast Guard. It sacrificed a few secret passages and the hidden family treasure, but it was still Jimmy’s tip about strange doings at the lighthouse that brought CLark to help. And the story opened with Kent literally acting as a reporter — delivering a voiceover narration to set the scene a Jimmy’s aunt’s waterfront home.

And, as in most of the television episodes, the Jimmy Olsen portrayed by Jack Larson is more of a comic character, perhaps not as sharp as his radio predecessor. As Larson himself observed, it was amazing how Jimmy never commented on the similarity in appearance of the bespectacled Kent and the costumed Superman. Even his aunt notices that in this episode. The TV plot also left Jimmy with plenty of things to be curious about — but he wasn’t: How Clark got to the island so fast, why Superman also showed up to help, and why Clark disappears whenever Superman is around. Those factors might not speak well for a young man’s future as a journalist, and may account for “Clark Kent’s” occasional wink at the camera.

But the TV team-up of George Reeves and young Jack Larson was a hit for six years — more than 100 episodes as Superman and Jimmy Olsen — with immortality waiting in reruns and on DVD. (The “Adventures of Superman, Season One,” Warner Brothers DVD set includes a commentary track on “The Haunted Lighthouse,” one of 26 first-season episodes. No mention is made of the story’s radio predecessor.)

Note: In addition to the full-story version of “Lighthouse Point Smugglers,” the Internet Archive has the individual episodes, numbers 74 through 79, on the first of 15 pages of Superman radio episodes uploaded to the archive by oldtime radio researchers: https://archive.org/details/Superman_page01

1 Response to Calling Clark Kent — not Superman — to the rescue