Hearing the reporter’s voice in All the King’s Men

In the movies of All the King’s Men, starring Broderick Crawford (1949) or Sean Penn (2006), charismatic Southern politician Willie Stark is obviously the main character.

But for the only radio adaptation I’ve found of Robert Penn Warren’s novel — as in the novel itself — the burden is literally on the teller of the tale, former journalist Jack Burden.

NBC University Theater adapted the story for the air before the first film version was released. Following its university-of-the-air format, it added scholarly discussion of the book at the half-way point by critic Granville Hicks. Wayne Morris played Burden, with Paul Frees as Stark. Clarence A. Ross wrote the script. While the one-hour broadcast includes major “spoilers” for readers or movie-viewers, both the Pulitzer-winning book and Academy Award winning film will survive the loss of suspense.

For the broadcast edition, Burden isn’t a journalist at first. He opens the story in flashback, already working for Governor Stark’s staff as in-house researcher and right-hand man.

Eight minutes into the story, Burden  explains how they met when he was covering Stark’s first campaign, trimming his fingernails during the speeches — until the key “a hick like you” speech that showed Stark’s promise as a populist leader, not unlike Louisiana’s real-life Huey Long, who met a similar end.

Burden doesn’t reflect on his shift in role from journalist to partisan hack putting his research skills to work on tasks that come close to blackmail. But students of politics, ethics and the media can read a lot between the lines of the hour-long broadcast. 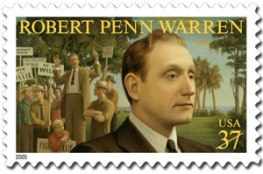 As students of writing, listeners would do well to crack open the book itself — Warren was poet laureate of the United States as well as novelist, and focusing on the printed page can be more instructive than letting compressed dialogue flow by over the radio or MP3 player.

As New York Times reviewer Orville Prescott put it when the book was new, “Jack may be morally as blind as Willie Stark, the Boss, but Mr. Warren has endowed him with his own exuberant skill with words.”

As a political novel and exploration of power, responsibility, idealism, cynicism, moral character and the meaning of life, Warren’s book won the Pulitzer Prize for best novel of 1946.  The 1949 movie won a Best Picture Oscar, among others. (The 2006 re-make didn’t do so well.)

Here’s one more clip from the Broderick Crawford film, as long as someone has posted it to YouTube. John Ireland plays Jack Burden, mostly as a face in the crowd, while Stark cranks up his “Nobody ever helped a hick but a hick” speech.

(When you see the reporter listening to a speech blurt out “He’s wonderful, wonderful,” that’s Jack — and you can tell he’s about to go over to the dark side.)

mild-mannered reporter who sank into computers and the Web during graduate school in the 1980s and '90s, then taught journalism, media studies and Web production, retiring to write and play more music.
View all posts by Bob Stepno →
This entry was posted in 1940s, journalism, movies, political corruption, Pulitzer Prize, reporters. Bookmark the permalink.