A 1947 picture of Britt Reid in transition

It’s been a year since Seth Rogen’s “Green Hornet” movie did its violence to the legend of the old radio hero by that name, whose newspaperman secret identity might have been portrayed as more of a role model for journalism students.

At least the radio version of the Hornet showed some actual “journalism” going on at the hands of publisher Britt Reid (the Hornet) and the Daily Sentinel’s reporting staff. Today’s example, this episode from 1939 “Put It on Ice.”

I was reminded of the Hornet’s potential by Eric Alterman’s article over at the Columbia Journalism Review, “The Girl Who Loved Journalists,” singing the praises of another buzzing, stinging hero helping out journalists — a young woman nicknamed “Wasp.”

While the Green Hornet radio show had journalists tracking down bad guys — with help from their masked-vigilante publisher — Rogen turned the Hornet publisher into a drunken fratboy, and had leading lady Cameron Diaz play a journalism and criminology graduate looking for temp work as a secretary, then being duped by the fratboy into planning crimes for him. Not the greatest role models for journalism students.

Like Lisbeth Salander, the expert researcher and computer hacker who calls herself “Wasp” in The Girl with the Dragon Tattoo, the original Green Hornet was willing to break laws to get information — he’d steal or fabricate evidence at a crime scene, manipulate the police, and trick bad guys into confessing to their crimes.

But when it came to telling the story, the Sentinel’s publisher and reporters had a more conventional code of ethics. It’s not hard to imagine them debating some of the same issues Alterman raises in his discussion of media ethics in the Dragon Tattoo trilogy. 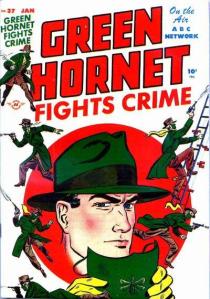 Both the original Britt Reid, secret identity of the Hornet, and Stieg Larsson’s characters fight crime as journalists, not just as superheroes. They work as part of a team — Reid’s staff at The Sentinel newspaper and journalist Mikael Blomkvist’s crew at Millennium magazine, plus Salander. Journalists are shown as willing to risk death, injury or jail to get a story, especially when the story is one that would do some public good.

Back to “Put It on Ice” from 1939. Granted, it’s closer to comic-book quality than the sophistication of Larsson’s novels, but at least it has a reporter working on a public-interest investigative story. The Daily Sentinel’s Ed Lowery goes looking for business racketeers who are sabotaging a local meat-packing plant to force the owner to sell his company.

While not a 21st century evil on a par with serial-killing and international business fraud stories of “Dragon Tattoo,” it’s a story a real reporter might cover in 1939 — or today. The Sentinel takes an interest because of the danger to the safety of plant workers and to the public health.

In the opening scene, reporter Lowery is on the scene for a near-disaster at the packing plant, an ammonia leak in its cooling system. An aide tells the company president not to talk to reporters, but Lowery makes an effective pitch for getting the whole story.  The full truth is better than the rumors the injured workers or the plant’s critics will spread, he says. The businessman agrees quickly, recognizing Lowery and his boss as “someone who won’t color the story.”

Later, publisher Reid mentions that city hospitals and public food centers are among the meat-processor’s customers, making the story one of even more concern to the newspaper. It may not take a vigilante like the Hornet to get to the truth, he says.

Reid: “When the public welfare is jeopardized the Daily Sentinel is interested, very interested. A reporter can find out a lot the police can’t…”

Lowery: “And believe me boss, when I start investigating, I investigate. Before I’m through, I’ll know this setup like the palm of my hand.”

The reporter sets out digging into company practices, inspecting the plant, and interviewing officials about business plans. But he’s frustrated by a lawyer with claims of privacy, and can’t find the company that’s trying to buy the business. But he runs into a middleman business broker blocking him with a stonewall involving a “perfectly legal” business name hiding the identity of the buyers.

It’s not until then that publisher Reid decides to have the Hornet do some undercover work to uncover the criminals. It’s not entirely unlike Mikael Blomkvist, at the end of Girl With the Dragon Tattoo, deciding to build a business-corruption expose based on some expert computer hacking by his friend Lisbeth, the Wasp.

A journalism ethics class could have a good time debating the difference between the Hornet and Wasp style of ethical violation — on a stories related to the public good — versus the controversy over British tabloids hacking into the voice mail of celebrities and crime victims.

A professional CD release of this Hornet episode is available in the Radio Spirits collection, “Green Hornet: The Biggest Game,” featuring 20 half-hour episodes from 1939.

The streaming audio linked here is from a collection of Archive.org Green Hornet uploads.

mild-mannered reporter who sank into computers and the Web during graduate school in the 1980s and '90s, then taught journalism, media studies and Web production, retiring to write and play more music.
View all posts by Bob Stepno →
This entry was posted in 1940s, crime, ethics, GreenHornet, journalism, movies, novels. Bookmark the permalink.