Editor Randall: “We’re going to fry this story over again and fry it hot!” He asks new-hire Kitty Carmody, “You’re from Chicago, huh… They teach you to swipe pictures?” She replies, “Well, I’ve done everything.” Isapod (Boris Karloff) clearly hopes that’s true.  Click to play the whole “And I thought I was cynical” scene…

For students watching the 1931 film “Five Star Final” with Edward G. Robinson as a guilt-ridden tabloid editor, and for anyone looking for an audio alternative to the old-movie experience, here is something close to a radio sequel to the story.

This premiere half-hour episode of the long-running series “Big Town,” is a melodramatic little tale titled “Pittsburgh Lil.” Robinson plays editor Steve Wilson of the Illustrated Press, a scandal-monger with a lot in common with editor Randall of the Evening Gazette in “Five Star Final.”

To better appreciate the rapid-fire dialogue, you can follow along with the script of “Pittsburgh Lil,” available from Generic Radio Workshop. The story manages to work the Alaska frontier, Ibsen’s “Doll House” and a Beethoven interlude into the plot; you’ll have to listen — or skim the script — to find out how.

The Illustrated Press is portrayed as an anything-for-circulation paper, about as bad as the Evening Gazette in “Five Star Final,” which was inspired by my favorite nutty tabloid of the 1920s, the Evening Graphic. The film was based on the 1930 play “Five Star Final” by Louis Weitzenkorn, who had served briefly as editor of the Graphic. (Both the movie script and a DVD of the film are available at McConnell Library for my Radford students.)

“Big Town” starred Robinson — better known for gangster roles like “Little Caesar” — as managing editor and the 27-year-old Claire Trevor as “Lorelei,” a sophisticated social worker turned society reporter. Her editor is her “reform” target in this first episode.

While plenty of later “Big Town” episodes are available online, they portray a more evolved Wilson — as the racket-busting editor of a crime-fighting paper. The transformation from scandal-sheet to civic pillar appears to have happened in the first few months of the series, but only the opening two episodes of that story are in the online audio collections.

In the missing episodes, Wilson apparently wrested the sleazy paper from its controlling owner and set out to change it, change himself, and change the city named “Big Town.” His inspiration came from his muse, Lorelei, and by Pittsburgh Lil, the subject of his scandal-mongering, who tries to kill him in this opening show.

Steve Wilson stayed in control of The Illustrated Press as a corruption- and racket-fighting editor for 15 years on radio, with Robinson in the part for the first five years and Edward J. Pawley for most of the run. (As “fighting managing editor” for most or those years, Wilson’s motto was the “Freedom or the Press is a flaming sword…” line now hinted at the top or this website.) 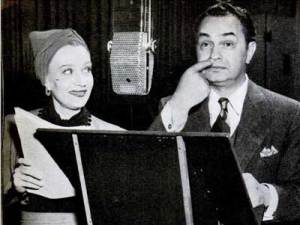 Ona Munson and Edward G. Robinson, indicating timing was “on the nose,” during a Big Town broadcast.

Trevor was replaced by Ona Munson in 1940, something of a tabloid reunion. Munson and Robinson had starred together in “Five Star Final,” where he played the guilt-ridden editor and she played Kitty Carmody, a conscience-free sob-sister from Chicago who teams up with creepy reporter Boris Karloff on the sensational story that convinces Robinson’s character to quit the paper.

For years only available on Turner Classic Movies and online clips of its trailer, the full-length film Five Star Final is now part of the Warner Archive video collection.

For more the radio show, see my Big Town page.

Note: In spring 2012, the full film Five Star Final was posted at YouTube. I would have expected this to be a copyright violation that YouTube would block, but perhaps some loophole allows them to keep it online. Unless they do, here it is…