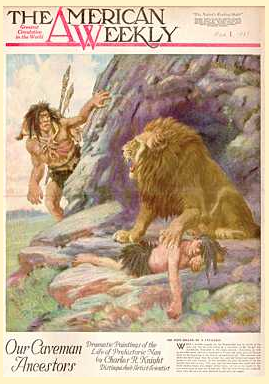 Here’s one from the journalist’s “be careful what you wish for” department.

Rand’s Esoteric OTR‘s collection of Front Page Drama episodes captures a 1930s-50s radio show that was a fascinating crossover between radio, newspapers and public relations. The program in question was one of the Hearst newspaper chain’s attempts to use radio to directly promote Sunday sales of its local newspapers around the country. (Another was “The Club Car Special,” based on Hearst’s syndicated March of Events and City Life Sections, including cartoons and humor columns by the likes of Will Rogers and George Ade.)

Going by the full name, “The American Weekly Program: Front Page Drama,” the radio series showcased a “true life story” from the forthcoming American Weekly magazine, a colorful tabloid full of fiction and news that claimed the “Greatest circulation in the world” and was carried by Hearst-owned Sunday newspapers. The covers shown here capture the flavor of the magazine, although they are unrelated to the specific radio broadcasts mentioned below. The samples are from an author and collector’s website about classic illustrators.

Judging by Randy Riddle’s collection of transcription disks and titles in other collectors’ logs of the show, most “Front Page Drama” episodes appear to have focused on well-acted short dramatic presentation of that week’s story — investigators uncovering a fraud spiritualist, police investigating murder, mysterious happenings on an isolated lighthouse, and more.

But — just as journalism students are taught — the reporters were generally not part of their own stories, with a few exceptions. This is one. 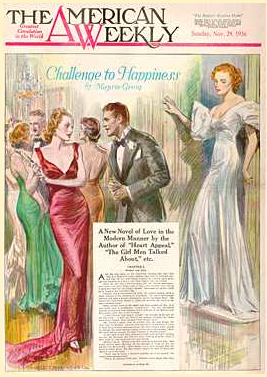 A Perfect Pair is the story of a reporter for a small-town daily, “The Bee,” stumbling on a big-time story. Another old-time radio collector I contacted lives near the home of the Newtown Bee newspaper in Connecticut, and was convinced that paper was the source of a radio story, possibly this one. However, the paper in the story is called the “Brownsville Bee” — and that was once the name of a West Tennessee paper — unless, as other dramatic series sometimes announce, “names have been changed to protect the innocent.”

Still, the description of the weekly paper’s office and editor at the beginning are classics, as is the reporter’s lament about covering ladies luncheons, society notes and other routine local news. What was true in Brownsville was probably true in Newtown, and if I ever find a collection of 1934 American Weekly editions, I’ll check the story itself.

If your browser does not show an audio player, click the title to download the MP3, or go to Rand’s original podcast, Front Page Drama: A Perfect Pair

I haven’t heard other American Weekly episodes where a newspaper reporter’s own life is dramatized, although J.David Goldin’s Radio GoldIndex and compilations by a few dealers in MP3 collections include a Front Page Drama episode from August 15, 1937, titled “Girl Reporter,” which Goldin describes as “cub reporter shows the old city editor a big story right under his nose.”

Radio, similarly, kept the idea of the “old media” newspaper and career of newspaper reporter right in the ear of the audience for radio, the “new media” in town.