… because he was on radio. The show began as “Flashgun Casey, Press Photographer,” although its later name “Crime Photographer” was a better description of its typical plotlines — more detective stories than journalism-procedurals.

However, I love the film “Meet Flash Casey” that preceded the radio series by a few years. Both were based on a pulp-fiction character by the same name. (For some of you, this will look awfully familiar — I posted the film clip at my Other Journalism blog last year because this one wasn’t up and running yet. With the semester coming to a close, I think the opening graduation scene makes the fim timely again.)

Like his first boss, a crusty editor who greets him with “Not THE Flash Casey!… Never heard of you,” you should get to know Flash Casey, radio’s best news photographer. For a dozen years on radio, plus film, comic book and TV incarnations, Casey was the classic wise-cracking, fedora-wearing newspaper cameraman. In this 1938 film clip, he’s right out of college, hat-in-hand looking for his first job. 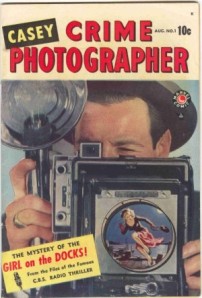 Casey in the comics

Message for graduates: Finding a job may be rough today, but it has rarely been easy. Still, like Casey, you never know whom you might run into. (Watch the clip, or the full-length Here’s Flash Casey, at Archive.org.) His attitude, camera and sense of a humor already show promise, even if it is only a B-movie. Notice, too, how the newspaper’s spin-off magazine and competition between the two editors add plot twists and opportunities for young Casey..

Also, if you’re interested in “new technology,” watch for the appearance of a pre-war Leica 35mm camera later in the film, along with several scenes worth discussing in a media-ethics class.

During his long run on radio, Casey was the old pro, not the young graduate in the movie. In the series called “Casey, Crime Photographer” or just “Crime Photographer,” he was the “ace cameraman who covers the crime news of a great city,” usually with the help of reporter Ann Williams and the regulars at the Blue Note Cafe. Most of the plots involved more crime-solving than crime-reporting, but often had very good jazz piano in the background. And the original intro must have warmed the hearts of news photographers in the audience:

“Out of a big city’s roaring life, out of a great newspaper’s pounding heart, come the exciting adventures of a man with a camera, Flashgun Casey, Press Photographer…
Tough, daring, typical of the men who often risk their lives so that you may see the news as well as read it. Their salaries are not large and they seldom get much credit but their lives are packed with danger and thrills.”

Casey entered the radio world in 1943 carrying a case full of breakable Speed Graphic photo plates after grudgingly covering a movie star’s wedding for the Morning Express. As he put it, “I was knee deep in celebrities… white satin and orchids fairly drip from the lens.” But in the darkroom, he discovered that wasn’t true — because this was The Case of the Switched Plates. (click the title to play or download the program if no player icon is visible below)

Casey’s they-all-look-alike press camera and plate case lead to a plot about a mixup, “developing” evidence of a crime, and a discussion of press reporters lifestyles, including their need to moonlight and the temptations of hanging around with nightclub entertainers and fashion models with expensive tastes.

There’s also a classic bit of old technology — Casey gets a lead by overhearing a call from the next phone booth, which also provides some good banter with his editor:

Casey: “I just got some shots for the morning paper and if I were you I’d leave plenty of space on the front page…”
Burt: “Well you better get back with something soon or I’ll hold a four line spread in the obituaries for you…”

If you like what you hear on this page, see the Old Time Radio Researchers Group collection — which is huge, divided into several zip archive files, some of which include comic books as well as the radio shows. There’s a separate page of single episodes, including the ones below. Perhaps not coincidentally, the actor who played Casey, Staats Cotsworth, also was among the actors who played another radio journalist, the title role in the daytime drama, “Front Page Farrell,” which I’ll get to some other day.

For further exploration of journalism issues, this 1947 tale is “Bright New Star,” in which Casey and Annie present some time-honored skepticism about press-agentry and publicity-seekers.
Finally, this third episode, from 1954, is “Source of Information,” in which Casey has a visit from a down-on-his-luck former reporter who has been sitting on a big expose for, perhaps, too long.

The Old Time Radio Researchers Group’s Casey collection at the Internet Archive has 77 episodes of the radio series, from 1943 to 1954.

mild-mannered reporter who sank into computers and the Web during graduate school in the 1980s and '90s, then taught journalism, media studies and Web production, retiring to write and play more music.
View all posts by Bob Stepno →
This entry was posted in crime, magazines, newspapers, photographer, reporters. Bookmark the permalink.